Have you ever had tamarind?

That’s the first question to start off class today. This led us to some research. We started off class with “tamarindo literacy.” We looked up “tamarind” on Wikipedia.

Wikipedia is helpful to look up ingredients and to get some historical information, including etymology. For tamarind, here’s what it says about the roots of the name.

The Arabic name describes the “tamar” or date, the Indian version. This goes back to the times of Marco Polo and before, but also suggests elements of trade, which further demonstrates the movement of foods, languages, and peoples. Further, the influence of Arabic on Spanish is well-known, and even in the case of my surname, Alvarez. For more on that, you can read up on Wikipedia. There are a lot of words that have Arabic roots in Spanish, many for food. One of my favorites is “café”: qahwa (قهوة). Back to tamarind, there’s a note at the end of this etymology entry about a Mexican tamarind strand, “guamúchili”, which should be “guamúchil”. It looks like this:

Several folks in class had tried tamarind in various forms, including as a sauce, a candy, and as a flavor for soft drinks. We confirmed some of this in the “culinary uses” on the Wiki page. 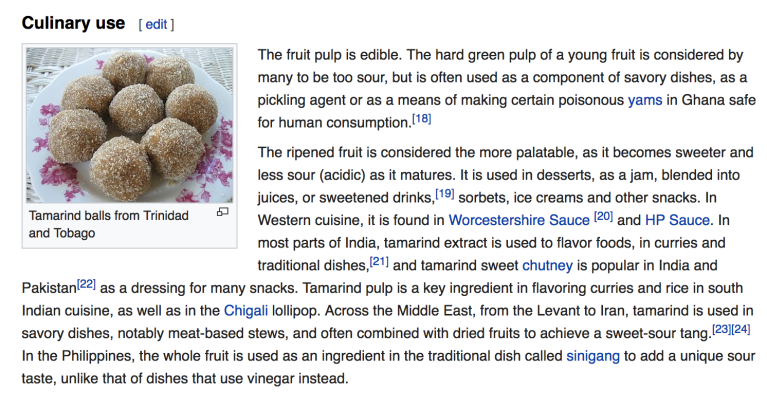 Richey and Soannie both had tried the “tamarind balls” in the image. Both described the fruit as a sweet treat, sold in packages. The image is pretty clear that the tamarind balls are covered in sugar. Note the use of the word “acidic” to describe sour. That term “palatable” is also helpful when we’re thinking about our food writing. But note all the uses for tamarind across the globe, and the diversity of ways the fruit gets prepared.

Wikipedia gave us a good place to start to think about tamarind on context, historically and its migration patterns. And no doubt, Wikipedia is a great place to start research, but it should not be the only place. It’s a place to start. And where to go next? Well, check out the references:

And even more, there are references:

A place to start, but the sources are there should you want to explore further. And, you know, those sources have sources too. So goes the research.

This tamarind research had a goal, however. Today we tried some tamarind candy, Pulparindo.

After trying the candy, which has a distinct flavor, we tried to describe with as many words as possible the different kinds of tastes we registered. Some first thoughts were “sour,” “spicy,” “bitter,” “salty,” and “has a kick.” I asked for synonyms for these words, and we could see we needed to build a word bank to help us add to our sensory vocabulary. I offered this to the class, a chart of “sensory vocabulary.”

This image gives some synonyms for thinking about your descriptions. Credit goes to Profe Lance Langdon at U California Irvine for sharing this image. Profe Lance had Taco Literacy in mind when he saw this one. The language here was developed for tasting wine, but you can see applications for how all this sensory description can be useful for what we’re doing in class. There is no sense of “sound” offered, but for some dishes, you could imagine a “crunch” or even a “sizzle,” especially when writing about fajitas.

The chart gave us some language to think about how to describe the tamarind candy. Indeed, it is tangy, acidic, gritty, mushy and also firm. Now remember, these are not the only words you can use. Use these to start, but also remember the Thesaurus is your friend. Try looking up the word that best describes the flavor you are tasting, and then build a larger word bank.

We did some WordPress work. Students updated their “contact” to “about” pages, which led into how to publish assignments–as pages and not posts. We also had to check if the “pages” widgets functioned on our WordPress sites, and if not, we reviewed how to add a “pages” widget, as well as the Instagram widget in case students had added that yet.

Finally, we returned to Taco USA with some group work. The taco crew broke into groups of three to return to Arellano’s timeline. I started a Google doc and the groups each took a chapter to fill in the holes we left with last time. One group covered Chapter 2, another Chapter 3, another Chapter 4, and one more Chapter 5. The different groups scanned their chapters, and filled out important names/dates/places on the timeline. The groups each did their chapter and then reported to the class some of the highlights. Here’s where we have ended up so far.

1769: The first Europeans to enter what’s now California was an expedition led by Gaspar de Portolà in 1769.

1838: Mexican indigenous knowledge of how to pollinate vanilla learned outside of Mexico.

1848: US-Mexico war, Mexico loses 2/3 of territory to USA. Mexicans in conquered territory become US citizens, but also the Mexican American becomes an identity.

1870s: Recipes of Mexican or “Spanish” food had sneaked into recipe collections. Tamale sellers have been documented by this time.

1882: Alamo City Guide: Eat tamales, chile con carne and enchiladas. “Prepared in the open air in the rear of the tables and served by lineal descendants of the ancient Aztecs”

1890s: Heights of the street tamale vendors. The US in the midst of a tamale man invasion along with the chili con carne craze.

1903: Charles Fletcher Lummis and the Landmarks Club published a cookbook which its main selling point is that it had an opening section devoted to Mexican Food.

1923- Cholo Café, the second-oldest continually operating Mexican restaurant in the United States (since 1923),

1924 -La Golondrina topping them all, operating since 1924—since before there was an Olvera Street. The tamale wagons have been documented to be waning by this time.

1931-while El Coyote (opened in 1931 by husband and wife George and Blanche March) set up near the city’s ritzy Westside—but that sit-down scene had yet to establish itself,

1931- Tamale man makes a cameo in A Streetcar Named Desire.

1932- In 1932, just a year after Olvera Street’s debut, its operators asked the great Mexican muralist David Alfaro Siqueiros to paint a crowning diorama of a tropical America, the better to immortalize what they had reinvented.

1950: Juvencio Maldonado receives a patent for his tortilla frying device.

1954: The owner of Bali Hai, a Mexican restaurant in the San Fernando Valley, passes away, allowing Cano, the manager, to buy the restaurant and rename it El Torito.

1975: Ramon Gallardo opens Casa Gallardo; he is eventually bought out by General Mills

1976- Cano sells El Torito to W. R. Grace for $20 million and is hired as the president with the directive to expand

1982: The Times writes an article about the rising popularity of Mexican dining entitled “The Enchilada Millionaires”

1998: El Torito loses a lawsuit against Tortilla Flats of Laguna Beach for supposedly violating the restaurant’s trademark on “Taco Tuesday”

2018: Taco literacy: you can study Mexican foodways at a university.  Yeah, we’re in the timeline!

And that’s where we ended for today! Good class.