We started off class today with an invitation to follow our new buddies from the High School for Community Leadership on Instagram who are also practicing some #tacoliteracy.

While we followed the new folks, we left some comments on the hashtag #tacoliteracy and listened to the episode on Sporkful about culinary-cultural appropriation. In the portion we listened to, the notion of what is “authentic” and cultural are decontextualized.

This led us to think about what “decontextualize” might mean, and, conversely, what does it mean to contextualize. We had some interesting points about “background,” “more meaning,” “history” as being inherent when something is in context. From this, we can also ask how context requires some work, doing some research, and understanding some of the larger cultural influences that touch upon all things that transmit meaning, including food. With that, we can also think about how the experience we have from some foods/culinary traditions are “decontextualized,” removed from history and the background of the foods and the people whose culture that food carries.

The “decontextualized” is what we are up against in this course, and our goal is to put Mexican food in historical US and global context. As we’ve learned through the course, there are different approaches to this, but always this requires us to be critical, and to ask questions.

Cindy had a good point, though, about what “authentic” means in relation to different kinds of sushi. The US version, she said, has more fried food, more mayonnaise. This was distinct from sushi in the Japanese tradition. With this example of sushi, though, we can ask important questions about appropriation, but also what authenticity means for the food in a different context. But to claim that this US-version of sushi is not authentic, however, may be a different set of questions, and one that doesn’t necessarily lead anywhere unless we put sushi as a “meaning carrier” into context. On that note, with sushi especially, we can read the cultural significance that the food honors for Japanese folks, and how the culture honors masters, such as in this film, Jiro Dreams of Sushi

To put the food in context, to understand the deep resonances of the food for culture, for people, and in history, is the first step to contextualize the culinary tradition. On that note, we moved further in sushi, but to Mexican sushi.

Mexican sushi from Sinaloa, as featured on Munchies, Culichi Town:

With this episode, we learned about how Culichi Town creates a Sinaloan mariscos atmosphere, but also introduces its version of hybridity offering their take in sushi. With some back and forth, we came up with some arguments about appropriation and innovation in Culichi Town. No doubt, there is the question about whether this sushi is “authentic” in the Japanese sense, and whether the dish has been decontextualized. On the other hand, however, the sushi in the documentary is “authentically” Sinaloan, that is, northern Mexican from the state of Sinaloa. The atmosphere of the location, the live music, and the combinations of menus, all form something that is unique, and even “trendy.” That term, “trendy,” that’s something we’ll explore more in class, as that could help to serve us to think about some of the cultural aspects of foodways.

We turned then to more food! This time, marzipan, de la Rosa.

Only the best! The descriptions of the flavors ranged from sweet to salty, with some folks zeroing on the texture: powdery, brittle, dusty, soft. All on the money! We had some adventures unwrapping the marzipan candies, as Ariana mentions above, opening them in one piece is an art form. In fact, there are plenty of memes about this. But the legend is this: 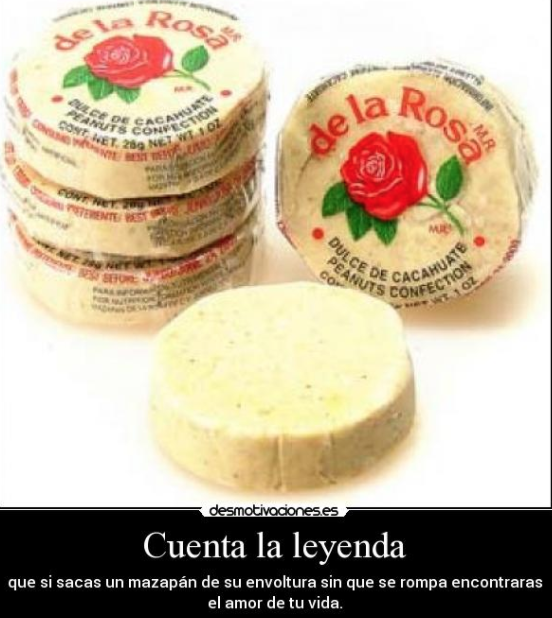 “If you can unwrap a marzipan without breaking it, you will find the love of your life.”

Well, naturally, we’d get this meme in response:

“I love you . . . like a friend.” Marzipan fun, but we also did some marzipan literacy with some research on Wikipedia to get us started.

We got some history with that, also some of the etymological roots, and how the food travelled around the Mediterranean Sea then across the Atlantic Ocean. We also spoke about the different varieties of marzipan from around the Americas. For Paige, she had tried fruit versions in Florida, mostly made from almonds. The ones from de la Rosa, however, are of a combination of peanut and almond, and, for sure, plenty of sugar.

Finally, we ended class with a quick plug for the Netflix series Ugly Delicious. The episode about tacos features Gustavo Arellano telling the history of Taco Bell and Mitla Cafe.