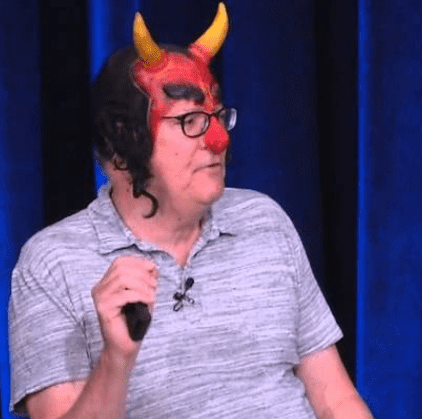 On this day of Taco Literacy, we had the pleasure of welcoming the legendary Robert Sietsema of Eater NY. For me, it was a great pleasure that we agreed to come to talk to us about how came to writing about food, his upbringing, and, of course, the joy he has for his job as a critic.

I first encountered Profe Robert a few years back at the Southern Foodways Alliance Fall Symposium in Oxford, Mississippi, where I was a Smith Fellow, and where the idea of Taco Literacy first became a possibility in my mind. Robert delivered this talk about Southern-style fried chicken in NYC.

What I loved about his talk, beside the mask, was the sheer pleasure expressed when talking about food and the kinds of research he did around the city. It blew my mind that someone could be so knowledgeable about food, as food writing was relatively new to me at the time. Listening to him talk reminded me of a professor I had during my second year of my undergraduate studies at the University of Arizona. At the time, I was struggling to decide what I wanted to do with my life, as I was leaning toward being an engineer or accountant–a major that I thought would provide some financial security for me, though I was not interested in either subject. I had taken a general ed course that focuses on the great works of literature, and the professor was in the English department. I remember one morning (it was an 8 am class, mind), how excited he was to speak about Chaucer, the passion he had when he shared his love of this writer with us, a writer he said he had written about in his research. To me, it was a breakthrough–that this guy loved his job, that he was happy to be there in class to share his love with us. Growing up, my folks never had this kind of passion for work. Work was something we did, but not something we could enjoy. This prof turned me to an English major, and I never looked back.

Robert’s talk, his joy, gave me the same feeling. And certainly that joy came through in his talk in class. Before he came, though, we did a little homework about him. Just recently, in fact, he published this piece about 35 Outstanding Tacos in NYC.

By his research, we could certainly recognize that Profe Robert knows how to practice taco literacy. I got to see this first-hand when I did a taco tour of Bushwick with Robert and Gustavo Arellano, author of Taco USA a year ago, just after I arrived back in NYC after living in Kentucky for about five years. It was during this taco camino that I first proposed to Robert about coming to give a talk at St. John’s when Taco Literacy was up and running. Well, Friday the 13th was the day, and I’m thankful he agreed to share his passion for Mexican food with us.

Robert began his talk by speaking about his life, telling about the culinary traditions of his household growing up. According to Robert, being the son of scientists affected his sense of food. By that, he explained that his parents believed in “progress” in terms of food, and that played out in food items in cans, and dehydrated potatoes: “I grew up on artificial foods,” he said. He compared the time preparation for making mashed potatoes with that of the dehydrated, “instant” mashed potatoes.

This was well before the time of organic foods, so for Robert, eating food from a can was considered “good eating” in the Midwest, but also the world science promised the generation, one of less work and more time for leisure. When he moved to Texas, however, his culinary horizons began to expand, as did his appreciation for different kinds of foods–though often still in cans.

It was in Texas where he encountered Tex-Mex cuisine. Chile con queso, or queso dip, he explained, was what really saved him (and still kept him in his tradition of eating canned foods). For Robert, Velveeta and Ro*Tel chili.

In Texas, however, Robert encountered barbecue, and different varieties of Mexican food. He also began to explore more about the German and Mexican roots of Texas cuisine, and his interest in foodways began to take off. Moving to NYC in 1977, however, was when he really began to become excited about food.

In NYC, he joined a band called Mofungo, a band that many folks who indie music still speak about with reverence.

In between shows, Robert would try out different restaurants, and soon he began to create his own food guides, which he circulated to folks in other bands. That was it, the spark that turned him into a food writer.

Since Robert was around NYC during the 1990s, he also noted the historical change in the City’s demographics, when Mexicanos began to arrive. “There were a few markets, the first I encountered was in Williamsburg. It was a grocery, but in the back, they were selling tacos. There was a little table, and the food was fantastic. Then more markets started appearing across the city. And since then, the Mexican Pueblans have enriched the food of New York.”

From his lecture, we could see Robert had a great grasp of history through food, pointing to the movements of different foods around the globe, especially chiles. I made a list of quotes I really enjoyed hearing from him. I end this post with these, and also with the thankfulness that he came to class. I ended class with a note to the students. I remarked that we all see how much Profe Robert loves his job, the passion he has for his work, and I mentioned to students the experiences I had when I decided I wanted to be an English professor. “Find your joy, find your passion, and let that guide you, let that be where you work, where you love, and share that with others.”

“The colonizers are assholes”: referring to colonial empires and the exploitation of markets to capitalize on indigenous foodways.

“You gotta love potatoes”: referring to the migration of potatoes across the globe, in reference to the potato famine in Ireland (and the extrapolation of foods like mutton from their colonizers in England).

“Writing is really writing if you are writing about something you give a shit about”: in reference to becoming a writer and finding one’s voice. This was also in relation to his time in graduate school studying English literature, and how he couldn’t find his passion in this type of writing; thankfully he found his passion in writing about food

“If you like to write about food, write about food”: advising students to start writing, write their own blogs, find their voice, build an audience, and don’t wait to be approached to be an editor to be a writer; write first, and in time, your time will come.

“Fusion happens by itself. It doesn’t need to be intended”: Robert was answering a question from a student about fusion restaurants. To this, he added that, “fusion is fine, but must be done with respect.”

With regard to appropriation, Robert said, “Everyone has been stealing other people’s foods forever. The question is, are you reverent to where the foods came from?”